We all survived my first week back at work. I don’t think I’ve been so exhausted in a long time. Hugo chose to break his recent habit of sleeping through, which didn’t help, but I think much of my tiredness was due to the pure stress of having to be so organised. I can see a future of slow cooker meals, a much messier house and weekends full of washing!

The first half of our week flew past due to the aforementioned work. Thursday and Friday were a bit of a slog. The kids and I were exhausted and the house is still a mess from all the painting disruption. Not a good combination. Elena is well and truly wearing the ‘terrible two’ mantle, although it’s pretty hilarious at times.

She has taken to demanding assistance eating her breakfast…what’s good enough for Hugo is good enough for her, it seems. Trying to cajole her into feeding herself this morning, I told her, “You’re two and a half – you’re big enough to be feeding yourself!”. To which she threw me a dirty look, “I’m not a half. You’re a half!”. So there, mamma.

Just before Christmas, Alex, his brothers and father, poured some concrete to extend our chicken coop slab. They did such a great job. I don’t think I’ve ever seen such a neat piece of concrete. Unfortunately, our local cockatoos couldn’t handle such a blindingly brilliant slab and decided to drop half eaten apples all over it before it hardened, giving it a slightly pockmarked appearance. It’s okay. It’s still great…and at least we all witnessed their handiwork before the blasted birds had their way.

Needing a distraction from all there is to do inside the house, we’ve made a good start on the chicken coop. I did loads of research before deciding to go down the flat-packed coop path. One of the major reported flaws of flat-packed chicken coops was the poor finish of the wood (and therefore poor water resistance). I tried to buy one of the better quality flat-packs, but the quality is not particularly great.

To counteract this, we decided to treat the wood with a decking treatment before constructing the coop. The product we were recommended at the hardware store was Wattyl Express Decking Oil. It’s water based and fast drying, and claims to combine the protective qualities of both decking oil and acrylic treatments. I guess time will tell. It certainly looks much better than the original finish on the wood.

Over the weekend I’ve been staining away (one coat on the interior pieces, two for the exterior) and, finally, it’s all done! Seven hours with a paintbrush and two tins of stain later – I’ll be happy to give the painting a miss for a while. 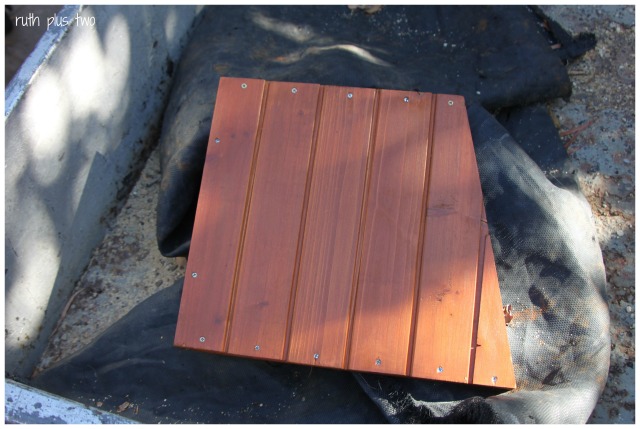 We made a pretty good start on the construction side of things this evening after the kids went to bed. I was surprised at how quickly it came together. We’re using liquid nails along the joins, as well as the supplied screws, to give the structure a little more stability.

In other news…well, we’ve been eating our own tomatoes for the last week. I know it’s only a small thing, but it does warm my heart to be eating food we’ve grown ourselves. I’ve been slowly adding stitch markers to my Etsy store. They’re actually quite addictive.

It’s Kid’s Clothes Week again next week. I’m tossing up whether to participate again this round. I’ll be completely knackered, but I think I can probably manage at least one hour of sewing an evening. And the kids will need some new clothes when the cooler weather hits. But then again, it’s quite possibly an insane idea.

So, what do you think? Crazy, or ambitious? I know which side of the fence I’d rather fall on, but I fear I’m squarely in the crazy camp.

This entry was posted in chickens, Etsy, Kid's Clothes Week. Bookmark the permalink.