The combination of Norfolk Island’s warm climate and strict quarantine restrictions means many of the island’s residents grow as much of their fruit and vegetables as they can. Mum and Dad are no exception, although only being on island for part of the year makes the logistics a bit difficult. Their bananas, passionfruit and paw paw grow with little tending, as do delicious cherry guavas. 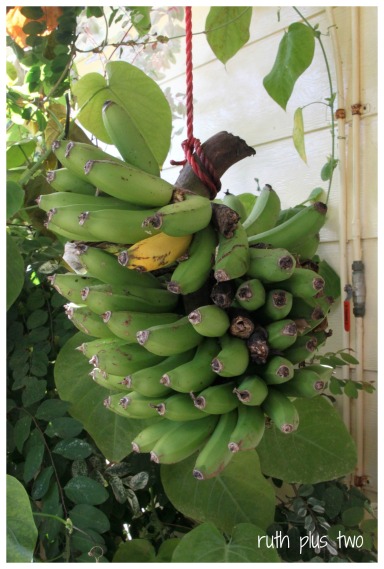 Norfolk ‘plun’, as bananas are known in the local dialect, taste a million times better than mainland bananas. They’re little and sweet, with a very intense flavour. When the birds start getting into a bunch, my father cuts it and hangs it on their back verandah to ripen wrapped in sheet.  The problem with growing your own bananas is getting through the glut which occurs when a whole bunch ripens at once – you go along having no bananas at all, and then, all off a sudden, you’ve got dozens on your hands!

We caught up with some friends and their two little ones for a coffee and playdate while we were on island. Mum had a bowl of bananas in desperate need of eating and I didn’t want to turn up empty handed, so I made a batch of my banana muffins.

Such a simple, quick recipe…although I never seem to measure the muffins out evenly! Perhaps I should re-write the recipe so I end up with a bit more batter?

They went down well – those muffins are always a hit with kids! I followed my previously-blogged recipe, guesstimating the number of bananas and substituting caster sugar for the brown in the recipe. The muffins were fresh out of the oven (I was running so late) so they ended up in a basket.

And we had a lovely catch up!

This entry was posted in baking, holidays, sweet. Bookmark the permalink.