Muesli bars were one of those luxuries. It doesn’t seem like a big deal now, but muesli bars seemed so special and forbidden. These days there are plenty of gluten-free muesli bars on the market, but I find most of them to be far too sticky and sweet. I find store-bought gluten-free muesli is generally uninspiring – either soggy when wet, sickly sweet, or spiked with things like oats or buckwheat which also give me grief. I spotted Kez’s new cereal in the supermarket the other day, and I must say that it’s very tasty and nicely crunchy. Not exactly healthy, but yummy nonetheless.

Anyway, I decided that Elena and I might try our hands at making some gluten-free, oat-free muesli slice. I found this recipe on taste.com.au, but some of the comments noted that the bars didn’t hold together very well. If I’m feeding this to a toddler it needs to be robust. I don’t want to be finding bits of it everywhere for the next month!

This is actually a great toddler cooking project (if you overlook the sugar) – lots of measuring, none of which needs to be particularly precise, some stirring and something yummy to munch on at the end.

This is what I call living on the edge – leaving Elena in charge of the mixing while I take a photo! 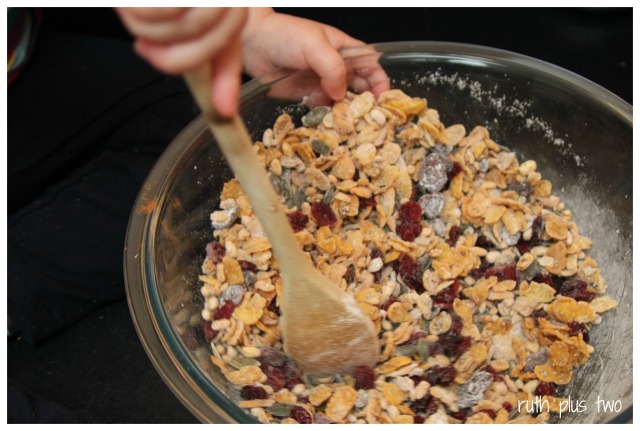 I adapted the recipe, and this is what we came up with. It’s too sweet to make the grade as a regular snack, but it’s right up there as a treat. This version’s not dairy-free, and I’m not sure if it would work with a non-dairy spread, or something like coconut oil. That’s something I’ll experiment with another day. If you chose a nut-free muesli, then this would be nut-free too (Kez’s cereal is NOT nut-free). The original recipe also contains sunflower seeds – I only left them out because I didn’t have any in the pantry.

You could add all sorts of fruit and nut combinations into the mix, and I guess dark chocolate chips would be really tasty too. Just a note – keep a good eye on the mix as it’s cooking. Mine got away from me a bit and it’s a little more brown than I’d like. It will seem very soft when it comes out of the oven. Give it a good half hour to an hour to cool and it will become much crunchier. 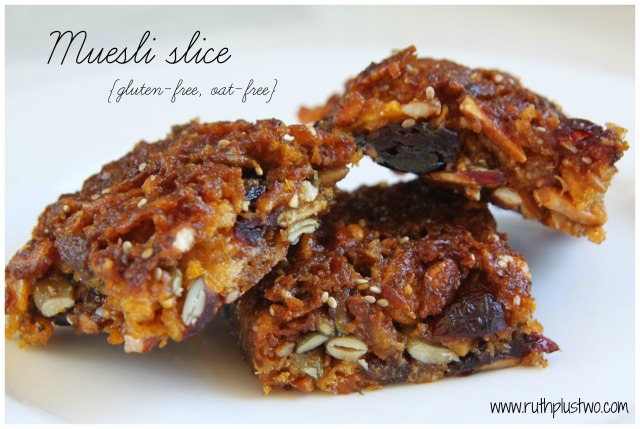 Combine dry ingredients in a bowl. Heat honey, golden syrup and butter together until bubbling (either in the microwave or in a saucepan), and stir through cereal mixture.

Press firmly into pan (I used the back of a spatula) and bake for 30 minutes or until golden. Remove from oven and allow to cool in pan.

Remove from pan and cut into bars/slices as desired.

This entry was posted in baking, gluten-free. Bookmark the permalink.