A vest for hands on hips

I’ve been sewing again – with knits. This time, I can report more success than last time. I have plans to sew a large portion of Elena’s wardrobe this year, and I’ve added one more garment to the tally. 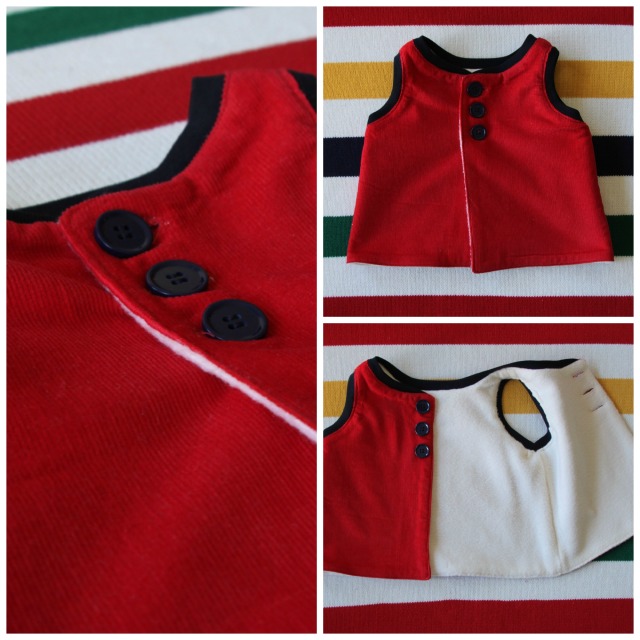 I was excited to find Dana over at MADE had put out a new flip vest pattern. I was even happier when a local fabric store had a corduroy sale. Red corduroy + cream polar fleece + navy ribbing = a happy Ruth.

The flip vest is much as the name suggests – a lined, reversible vest. The pattern is ridiculously clear. There are lots of photos and plenty of explanations to keep you on the right track.

The pattern provides two armhole options. I chose option two, where the ribbing is set into the seam rather than attached as a bias binding. Even though Dana claims it’s the fiddly option, I found it very straightforward.

I had no problems printing the pattern, either, despite the fact that it is formatted for US letter paper, not A4 like we use here in Australia. I just did the usual ‘actual size’ routine in my print settings and everything was fine.

Predictably, I had trouble finding the perfect buttons. I’m pretty happy with the ones I used, even though they were smaller than the buttons I’d been imagining. I procrastinated over the buttonholes, not because they were hard but because I was sick with a cold and too confused to think straight. There’s nothing worse than turning out a perfectly passable garment and ruining it with dodgy buttonholes!

And for picking cumquats that you’re not supposed to touch.

And for screwing up noses.

I’m planning to make Elena (and Hugo, in good time) more of these vests (in my new sewing room!). I should get plenty of use out of this pattern as it is sized from six months to five years.

Next time, I probably wouldn’t pair premium polar fleece, corduroy and ribbing. Even though it all turned out in the end, the combination of fabrics made for some pretty tough sewing. Perhaps next time I’ll pair a fleece outer with a cotton or flannel lining. I like the idea of the velcro, but, to be honest, I think the vest is pretty darn cute with buttons.

The crib notes version? I really enjoyed sewing with this pattern and Elena is a big fan of her new vest. Give it a go!

This entry was posted in clothes for children, sewing, sewing patterns. Bookmark the permalink.

8 Responses to A vest for hands on hips